A comprehensive list of what to do in hanoi, Vietnam. Includes all the major sights and activities in and around Hanoi.

The Old Quarter has a rich religious heritage. When the craftsmen moved from outlying villages into the capital, they brought with them their religious practices. They transferred their temples, pagodas and communal houses to their new location.

Hang Mam is the union of two old streets: an eastern offshoot called Hang Trung and the original Hang Mam. The name is derived from the various kinds of mam, or fish sauces, that are produced and sold here, as well as other sea products. The street was originally on the riverside, close to the day’s catch. 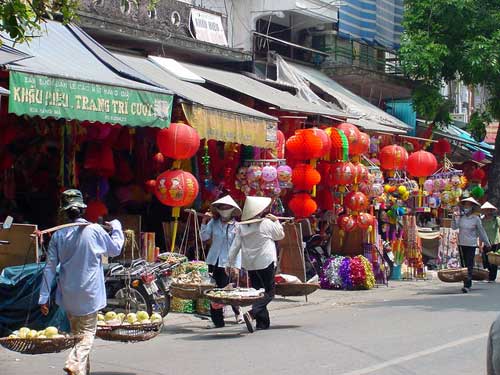 Nuoc mam, or fish sauce, is made from fish that are too small to be sold individually which are placed in clay vats with water and salt. Boiled water is poured over the fish and weights are placed on top of the mixture to compress it. The concoction distills for days, and the result is a clear amber juice that is rich in protein, vitamins and minerals. With aging, the fierce ammoniac odors of the fish become mellow, and like brandy, the flavor improves. The first pressing, which is the clearest and purest, is called nuoc mam nhi, or prime. The sauce was stored in barrels made on adjacent Hang Thung Street.

In the 1940s, new specialties appeared on the street. A small ceramics industry appeared along with those of memorial stone etching, coffin, and tombstone manufacturers

This street also is a union of two old streets. Hang May sold rattan products, and Hang Ma sold sacred joss (paper replicas of money, clothing, even stereo sets) to burn for the dead. Ma is burned in front of the altar of ancestors accompanied by prayers. Around the turn of the century, the streets became one: Ma May.

In the French time, this street was called “Black Flag Street” because the soldier Luu Vinh Phuc had his headquarters here. Luu was the leader of the Black Flags, a bandit unit operating around Hanoi in the late 19th century. They were essentially pirates who made a living robbing villagers and merchants. In the 1880s, the Black Flags cooperated with the Vietnamese Imperial Forces to resist the French who were attempting to gain military control of Hanoi.

In the middle of the street is the Huong Tuong temple, established in 1450, which honors Nguyen Trung Ngan (1289-1370), a governor of Thang Long, the former name of hanoi vietnam.

Hang Thiec is the street of tinsmiths. The craftsmen originally produced small tin cone-shaped tips which were used to preserve the shape of the traditional conical hats. A neighboring street, Hang Non, made the hats, and both streets comprised the Yen No hamlet.

Hang Thiec Street also produced oil lamps, candle sticks, and opium boxes. Tin shops sold mirrors, which they still do today, along with sheet metal, zinc, and glass. The street echoes busily with the clanging of hammers against the sheet metal. Workers spread out on the sidewalk shaping metal storage boxes and other objects to custom order.

In the old days, on this block inside the Dong Yen gate, barrels were manufactured. The barrels were used for storing and carrying water and fish sauce. The communal house and the temple of the barrel makers’ guild is located at 22 Hang Thung, but is hidden behind newer buildings. The street is shaded by the leaves of the xoan tree which has a fluffy cream colored cluster flower and bright red berries. The tree has various English names: Margosa, Bead, or China Berry tree. In May, the tiny flowers fall to the ground like yellow confetti. The furrowed bark is often scraped off by local residents, who dry and boil it to make a medicinal infusion as a vermifuge.

The Old Quarter is a precious legacy of Hanoi’s ancient past, but the area is challenged by rapid changes.

With the new economic policies, a dramatic building boom has begun, threatening the charm of the district. Local, national, and international agencies are now formulating plans to preserve the historic ambiance of the Old Quarter.

See more: Top vietnam things to do, plus suggested routes. Travel tips and advice for backpackers and independent travelers.